Women have always been at Tamarama. From our First Nations women of the Bidjigal and Gadigal People who lived in the area, to colonial women through to modern times, women have been and always will be a big and valuable part of this community.

In its founding year of 1906, Tamarama Surf Lifesaving Club (SLSC) commenced a proud tradition of keeping the public safe in and around the water of our beautiful beach. Women were part of that effort too, they were the wives, sisters, mothers, daughters, friends, aunts, carers, friends and grandmas of the surf lifesavers who supported and enabled their efforts.

Surf lifesaving began on the beaches of Sydney then spread around the country, first to Western Australia and Queensland then later to the other states. The Royal Life Saving Society, which originated in Britain, placed lifelines on beaches and held classes. Records show that the first ‘Bronze Medallion’ training and qualifications are awarded in 1910 at Bondi and Coogee.

Arguing that women were not strong enough to operate the equipment or swim in heavy surf, the Surf Life Saving Association banned women from qualifying for the surf bronze medallion and therefore from patrolling. Women were not permitted to enrol, but they were there in support roles for a long time until SLSA finally got the message that women too can save lives, perform rescues and manage many different roles within the organisation.

Despite being banned right up until 1980, many women did invaluable work behind the scenes as skilled fundraisers and supporting the male lifesavers and clubs in many ways. Some formed ladies’ surf clubs and competed in carnivals. Their carnival activity though was limited to a march past, as shown below at Tamarama, and further below in QLD.

Unfortunately, these women would not have even been allowed into the clubhouse as they were not members, and certainly at Tamarama – there were no female changerooms or toilets there for them. 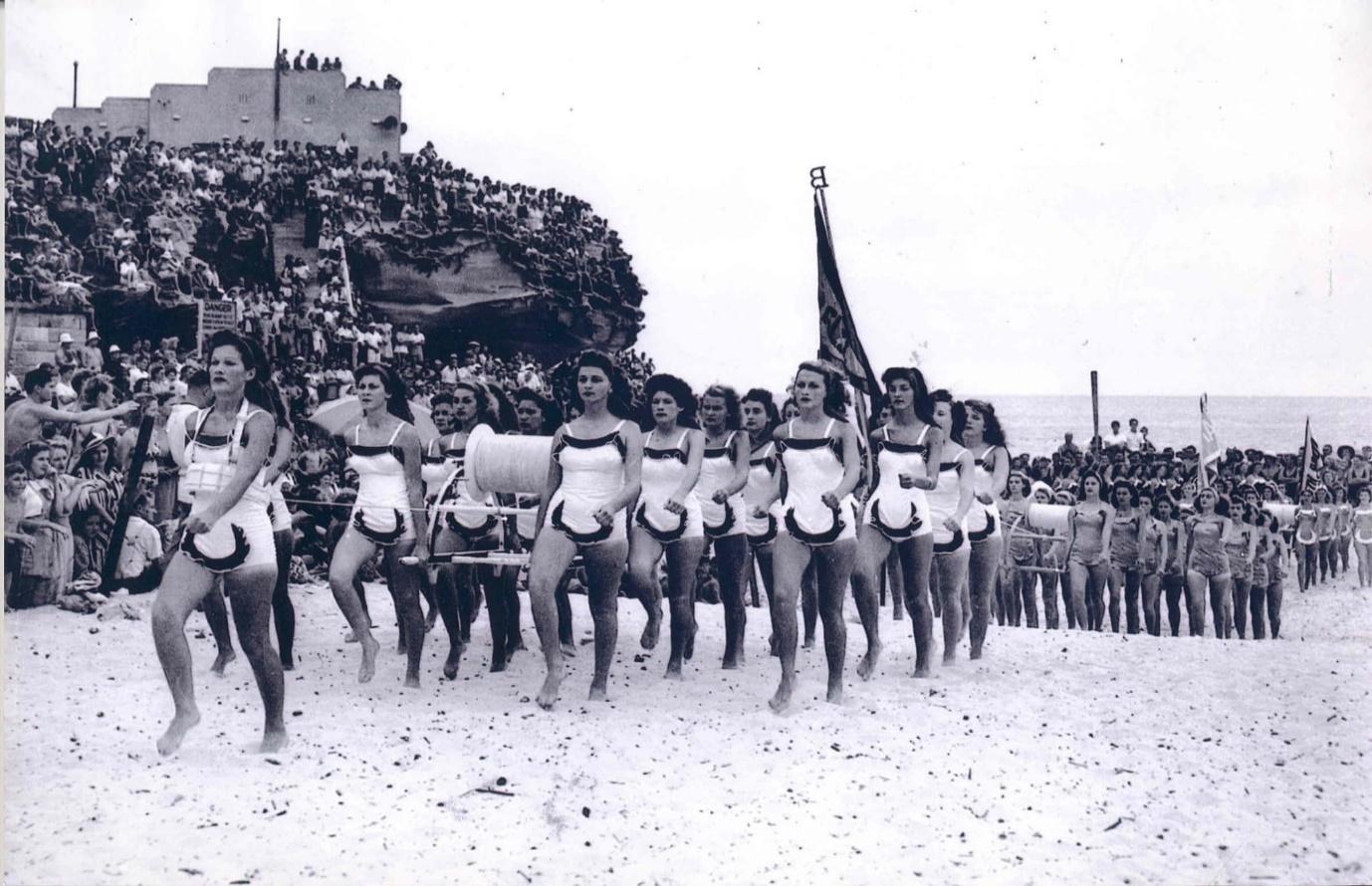 Women competing in a March Past at Tamarama SLSC, date unknown 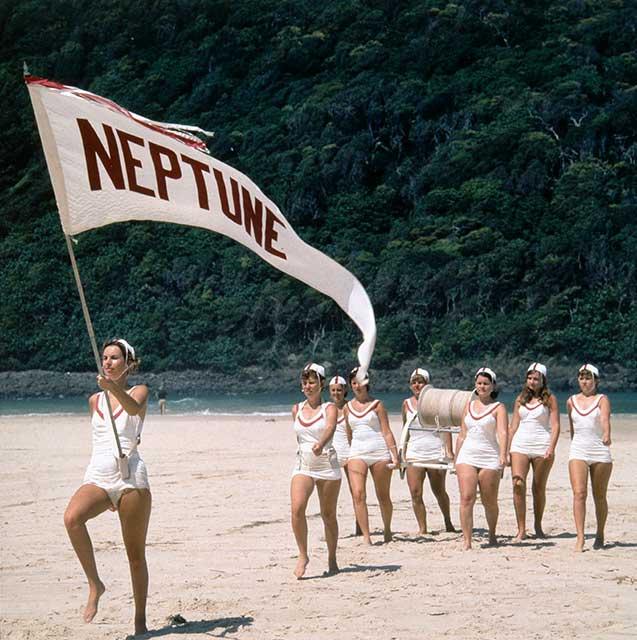 As we scroll through the history of surf lifesaving in Australia, finally one date emerges as particularly important - 1 July 1980 – when women were finally permitted to become full members of SLSAA. Seven years later, in 1987, Cathy Harding of Mooloolaba SLSC (Queensland) made history by becoming the first female captain of a SLSAA surf club. [1]

Women in Surf Lifesaving at Tamarama

Tamarama SLSC’s Annual Reports provide a slice of our history with regard to the role of women. In the 1960s female nurses provided first aid at the beach to support the Club’s efforts. In 1974, a survey was conducted of members on the question of allowing female members, with the survey results presented to the local SLS Branch. The Annual Report reflects a pragmatic view that allowing women membership may help boost numbers. Two years later, the 1976/7 Annual Report indicates that women were allowed membership – but only as “Associate Members” – with Joan Gillroy, the then President’s wife becoming the first female associate member.

Again the question is reflected in the 1978/9 Report - that admitting women could boost the club’s lagging numbers to help keep the beach safe. Finally the 1979/80 report states that women will be able to join as full members and do the bronze medallion to become surf lifesavers!

From the Chief Instructors Report 1980/1 comes the exciting news -

“For the first time in our 75 year history females had become eligible for full membership and we had the excellent result of nine Bronze Medallions and four qualifying certificates out of 17 awards” (being women).

In the first year that women are allowed into the Club they form the clear majority of new members, trained by then Chief Instructor Dave Radford.

It’s unclear how long these new female members stayed with the Club – it must have been difficult to be the pioneers into a previously all male space. We don’t know how SLS clubs made them welcome in other ways, or not.

Tamarama only had its women’s toilets constructed in 1987 – opened by the then female mayor of Waverley Caroline Markham. What we do know is that SLSA was extremely late in bringing gender equality to its membership, so 42 years later, women are still catching up so some extent.

Women currently make up around 30% of Tamarama’s active patrolling membership, and there are targets and a three year strategy in place to increase that figure. We know that there is no shortage of ocean loving women out there!

In addition to that, there are so many women who make up our ranks, and we as a Club are grateful to all of them. We have fantastic young girls in our nipper ranks, we have teenage girls in our SRC groups, we have their mothers, step mums, sisters, aunts, grandmothers, carers and other female figures in their lives who help in many ways. There are many other women in addition to our female active surf lifesavers who make a significant contribution to the continued success of our Club.

Some of those women who supported their husbands and male relatives over the earlier days and up to now include – Ellen Buist, Joan Wardell, Joan Gillroy, Beryl Copas, Catherine Laurence, Myrtle Bell, Karen Hourihan, Dianne Fryer, Jill Radford, Elana Sheldon, Judy Shires and Sanae Waddell. In celebrating International Women’s Day, we thank them and recognise their contribution.

We also take this opportunity to recognise:

We have a first-hand account of being on the very first female bronze squad in Tamarama – a then-teenage Brenda Miley and her sister were part of that group. Brenda was always a woman of the ocean, swimming, riding boogie boards & coolite boards, until then and learning to surf on a hardboard at Tamarama. Growing up - Brenda always wanted to join a surf club, was obviously super capable in the water but was told she can’t – women were not allowed to be surf lifesavers.

She remembers Tamarama as being a little different to the other beaches – the ‘glamour’ beach that also felt like a place where everyone was welcome. So when the call when out for Tamarama’s first female bronze medallion intake, Brenda and her sister were quick to sign up. The female squad were taught by Dave Radford as a standalone group to provide their own space to learn. Brenda recalls that Tamarama was an early adopter of bringing women into its membership, and this added to the aura of being in that first group. Brenda’s time at Tamarama SLSC was a part of her ocean journey – going on to compete at surfing national titles and becoming a successful local businesswoman establishing the award-winning surf school Let’s Go Surfing.