This special edition is a summary of the end of season Tama Glama 2021 Awards night. It started back in March when I was asked to chair the Awards committee, which felt such an honour, I had to say yes!

So here we go, we created a few new Whatsapp groups (!) and started planning a night that we hoped would be a success. First thing first, when are we celebrating? Well, with the club rebuild starting on 4 May we only had a few options, so the end of season weekend it is, Saturday 24 April!

Now it’s time to get the survey out and ask you to nominate club members, across 9 awards, for their contribution throughout the season. You certainly responded: 132 nominations were submitted in just 10 days, thank you!

Having awardees is one thing, but we also needed a crowd to cheer and celebrate with them. How many people can we have?, what's the Covid limit, how many functioning tables and chairs do we have… 66 people and a few “staff” working on the night, bringing us to 70, no more, no less!

Harriet, our fabulous MC for the night, sets-up tickets on Humanitix and you start buying them light hot cakes. Sold out 5 days before the event. We would have loved to host all of you but such is life post 2020.

On the day, David Murphy and his Keen Beans sous chefs: Audrey, Sammy, Paul prepared the most delicious food!

Harriet, Michelle, Ben, Guy, Arnaud and Lisa glammed up the hall for its final hoorah. Marlin compiled some of our best shots of the season for a background slideshow.

There was a red carpet, fairy lights, candle lit red and yellow table centres, the iconic cabana bar was stocked and the room was filled by happy members dressed with a touch a Glamarama and sparkles

Ok, time to jump in and find out who our winners are for the season!

Congratulations to all nominees and awardees and THANK YOU!!!

EE "Pop" Weir Trophy for Club Member of the Year: Michelle Cowans
This person was a clear standout for the EE'Pop' Weir Trophy for Club Member of the year, as she was nominated multiple times across multiple categories. You will know who this person is because she has dedicated ALL her Saturday mornings to training over 40 Bronzies this year, her time and devotion to training new surf life savers especially during the restrictions brought into the world by COVID. She went above and beyond to train and develop the biggest bronzie groups for as long as we can remember. She has a great passion and commitment to excellence in training and is such a motivated club member and model for what a true SLS member is. She puts so much time into training while also regularly patrolling. She is an amazing and a real role model as a life saver. She embodies patience, tolerance, dedication, fun, compassion. The best bronze maker any club could ever have!

Ron Buist Trophy for Club Service: Tim Murray
This member is an exceptional leader for Tamarama SLSC. Patient, supportive, generous, resilient and the list goes on. He took on a massive job 4 years ago and has been up for the challenge every day - apart from the day to day matters of the club that he has embraced (with all its colour and motion!). He has relentlessly lobbied for the club and been successful in navigating and negotiating a path to funding for the club renovations. He really deserves this award for his ongoing contribution and service to the club, especially fitting as this is our last event in the old surf club.

This group was nominated across multiple awards. They have re-energised the communication of what’s happening around the club. This has been a multi channel, collaborative team effort with everyone doing their bit. The result of their incredible work has contributed to a sense of connectedness and club spirit. The Communications around the Club have gone from irregular to prolific, interesting and very well put together by this group of pros that give enormous time to the production of TamaWaves and the other comms. Well done and deserved recognition for the efforts put in.

Jack 'Bluey' Mayes Trophy for Rookie of the Year: Hoa Nguyen
This recipient was nominated multiple times in this category, by people who know her as well as others who have seen her involvement around the club. She is fairly new to the club but her multifaceted involvement has been a constant within training, competing, subbing for others, always with a smile and sense of service. She has huge energy and enthusiasm for the club and surf life saving. She is one of the few French Connections in our surf club, and many people are thankful for her baking skills!

Dave Fryer Trophy for Outstanding Surf Rescue: Will Lenard
Whilst on competition training, this member did an off duty IRB rescue, at a neighbouring beach, in large surf (3m+ waves). The Bondi patrol were not capable of this rescue and the lifeguards missed. The patient was one wave away from being a submerged object. The patient was competantly brought to shore, given oxygen and handed over to ambulance paramedics.

John Kelly Memorial Trophy for Senior Club Member of the Year: Richard Hamilton
This recipient is a fantastic steady hand to have at the helm of life saving operations at Tamarama. He is such an intelligent, calm, kind, considerate and capable leader and we are really lucky to have him on the team. He has worked so much across stakeholder engagement and internal club communication, particularly in his leadership and communication with the patrol captains, which has seen an improvement in ensuring we deliver excellence in SLS at Tama. The role of Club Captain is so important for a Surf Club and he fits the bill and goes the extra mile all the time.

Sandra Fox Woman of the Year Award: Lisa Bodrero
This member has been nominated across multiple categories, but we felt this was most fitting. She has been a key member of the Tamarama Communications team in addition to seizing the chance to become an IRB driver in an otherwise all male team, in just her first season. She has also contributed to building the partnership that Tamarama SLSC has with Weave, discussing increasing participation of First Nation communities in surf life saving and how Tamarama SLSC can increase our links with these communities. She goes above and beyond to deliver great social media posts, TamaWaves content and in relationship building within and outside of our surf club. She puts in so much work into comms despite her hectic schedule, for example when Tama had the 86400 partnership which went smoothly due to her hard work.

(Note: Lisa did not vote for herself in this award, but was overruled by the 3 other members of the awards committee)

David Radford Trophy for Cadet of the Year Award: Allegra McGivern
This recipient has been nominated multiple times in this category. She is an enthusiastic and a committed club member having done her SRC in 2018 and just graduated for her bronze in March 2021. She is highly motivated, a keen competitor having jumped in and joined the group doing inter club competition and is keen to keep developing her life saving skills. She has been a valued member of Patrol 7 for a number of years, regularly assisting with water safety in nippers.

George Bishop Trophy for Under 21 Club Member of the Year Award: The Wills: WIll Lenard and Will Forrest
This is an iconic pair or young members at Tamarama SLSC, we felt that we could not award one and not the other. They throw their all into IRB training and have committed to the Club's IRB training program as trainers for crew and drivers. They've been on the beach from 630am every Saturday for some of these courses and then gone straight to patrol. They also both conduct themselves in a very humble way and are great role models to other young members at the Club.

Guy Waddell Trophy for Outstanding Dedication and Selfless Service (5+years member): Guy Waddell
One of the multiple nominations for this member read exactly like this: 'For all his services and commitment to the Club. He never expects anything back, but is always working behind the scenes to fix something at the club or train SRCs etc. Quite frankly, there should be an award named after him.' So thats what we did! Guy has devoted his time and life to Tamarama SLSC, from helping around with odd jobs around the surf club to mentoring and teaching Surf Life Saving to the future lifesavers at Tamarama SLSC. This year Guy trained his SRC group up into their Bronze Medallions, and supported them every step of the way. It is obvious how passionate he is about Tamarama SLSC, and this is why the club has created this category after him. 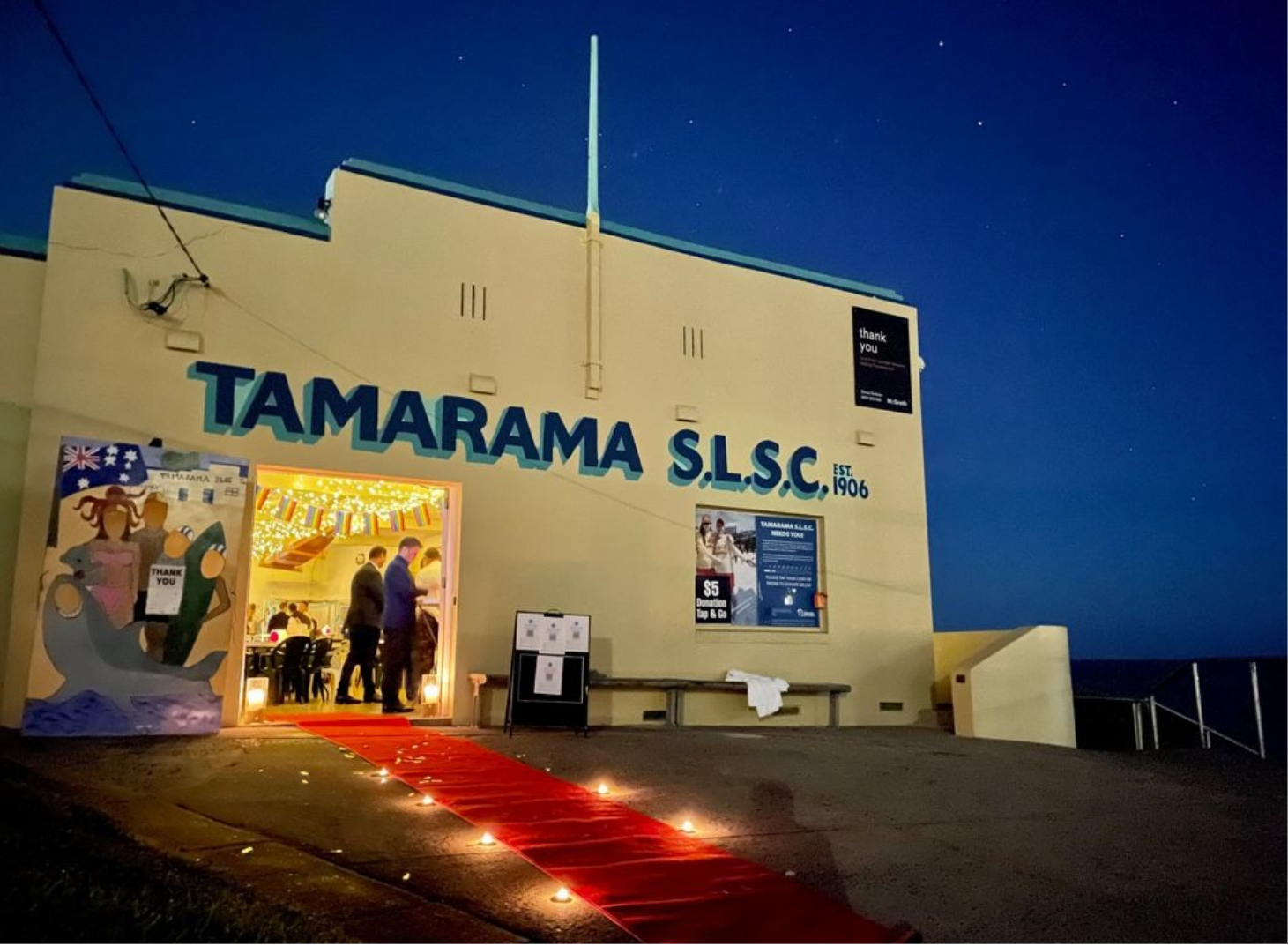 Additionally, the management committee as discretionary awards, and again these were all very well deserved:

Roland Talbot Trophy for Nipper of the Year: Eve Crichton

Top Gun - Most hours in the season: Rachel Feakes

Thank you for your contributions to our beloved community and congratulations to everyone!

Lisa and the Award Committee

Fine print,  we reviewed the nominations and used the following principles to select the recommended awardees: